skip to main | skip to sidebar

MERRY CHRISTMAS, ONE AND ALL! 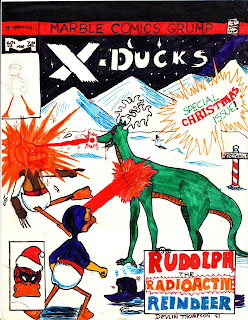 This is about as late in the game as anything you'll ever see on this site, since, as a rule, teen-agers' art is as painful to look at as childrens' art is great. It's next to impossible to avoid a bad five years or so before you get your mojo back... and of course, for lots of folks, it never does come back. For boys, it's usually an ill-fitting obsession with the rendering of chrome, or abdominal muscles, or the particular curve of the spoiler on a 280-Z. For girls, it all turns into stiff horses with flowing manes and giant-headed doe-eyed girly men. Nowadays, the ubiquitous manga influence* lets clueless teens combine both these benighted aesthetics into a unified horror embraced by both sexes.
My work here is a late-to-the-party example of the duck craze seen in comics fanzine art in the late '70s, inspired of course by the popularity of Howard the Duck. I had certainly read and admired Howard by this point (not following it as it came out--I was a bit young for that-- but buying them from quarter boxes, from which they were then readily available). I'm not sure if I'd seen any of the fanzine stuff yet, since at this point I was only reading current issues of The Comics Journal and its less intellectually challenging little sibling, Amazing Heroes. I believe that this may have had its origins as a possible candidate for the latter magazine's regular "silly cover" feature, though I'm certain that I never actually submitted a black-and-white version for consideration. I do recall another attempt to create a submission featuring "Nick Furry, Agent of S.H.E.E.P.", based on this cover, but, again, I never submitted it and it's presumed lost.
The "Rudolph, the Radioactive Reindeer" character may have been conceived of prior to this piece; I definitely did a good number of drawings of him, as well as his springtime counterpart, the "Easter Beast". At some point after this, I renamed him"Randolph", since I'd decided that he was in fact a separate character. and not literally Robert L. May's beloved creation. I don't think I ever really tried to compose any stories featuring him, content to only draw "cool" action shots. Which brings us right back to paragraph one. Mea culpa!

*Before someone chimes in here, let me note that this is not a critique of manga, per se, so much as an observation that certain surface elements of popular manga styles intersect horribly well with seemingly-inborn teen badness. It's just a very effective template upon which a kid may construct doo-doo. Not that we don't have plenty of equally effective building blocks right here in the good old U.S. of A.
Posted by Devlin Thompson at 12/25/2009 01:53:00 PM 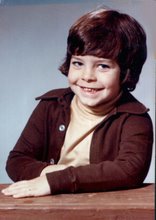 What is all this?

You might well ask. I was born in 1968, and by 1970 I had passed through my fecal-mural phase and done my first recognizable drawing (a rabbit head inside a balloon--possibly inspired by the Mickey Mouse balloons seen at fairs and parades, but that's just speculation). Over the next 11 or 12 years, until my work turned to crap as I hit my teens, I amassed a vast body of work. Unlike most folks, I still have almost all of it, thanks to the efforts of my late mother. Now, through the miracle of modern technology, I'm going to share it with you intermittently, until it becomes apparent that nobody cares, or I get bored, whichever comes first.

other sites of note